Pump-probe techniques are a class of ultrafast methods for perturbing (pumping) a system with light and watching (probing) the subsequent response as a function of the delay time between pump pulse(s) and probe pulse(s). The result is a sort of "movie" of the system evolving in time. The way in which the system changes and the pathways by which it relaxes back to its equilibrium ground state can reveal important information about the ground state itself. Developing methods to control material behavior on the femtosecond to picosecond timescale can also be interesting from a technology perspective. One picosecond corresponds to 1 THz--1000x faster than current GHz-scale processor technology. 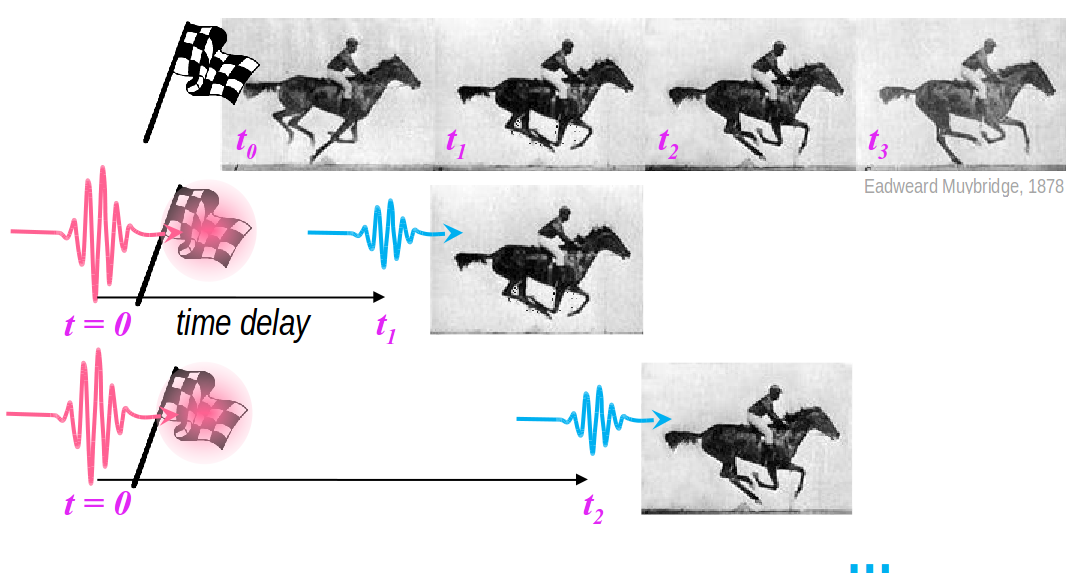 Photo credit: C. R. Hunt
Pump-probe methods do not work like traditional film. A "movie" is made by repeating the measurement many times, delaying the probe with respect to the pump.
A favorite example of capturing "fast" dynamics is the photo series of a galloping horse and rider by Eadweard Muybridge, partially shown at left. This series, taken in the late 1870's, definitively answered the question of whether all four of a horse's legs left the ground during a gallop. Muybridge captured the horse's motion using a series of cameras in a line that each snapped a shot as the horse rode by.

Ultrafast pump-probe measurements are usually not made in this way. Instead, the system is excited (the horse is set in motion) and the dynamics are probed (a single photo is taken) repeatedly, changing the time delay between excitation and probe. In this way, we can capture dynamics that happen much faster than modern electonics could record them.

The video below offers a fantastic illustration of pump-probe techniques.