Ultrafast laser sources can now be harnassed to combine tailored light excitation with ARPES, the central tool for mapping electronic behavior in materials. 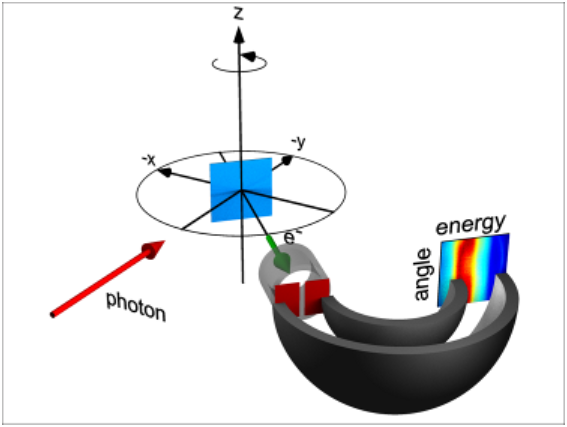 Figure credit: Novel Materials Lab, BU
An ARPES measurement scheme with a hemispherical analyzer detector. UV photons (red arrow) eject electrons (green arrow) from a sample (blue). Those electrons pass through a slit (red) and then are bent by a magnetic field. Their curvature depends on their kinetic energy, so kinetic energy can be extracted from their dispersion perpendicular to the slit at a CCD detector. Their dispersion along the slit is determined by their emission angle, which is related to their momentum in the sample.

Angle-resolved photoemission spectroscopy (ARPES) is a technique for directly extracting the electronic band structure of materials. ARPES measurements makes use of the photoelectric effect: photons at an energy \((h\nu)\) higher than a material's work function \((\varphi)\) will eject electrons. Measuring the angle \((\theta)\) and kinetic energy \((E_k)\) of the ejected electrons provides the necessary information to extract the electron's energy \((E_{bind})\) and momentum parallel to the sample surface \((p_{||})\):
$$E_{bind} = h\nu - \varphi - E_k$$ $$p_{||} = \sqrt{2mE_k}\sin\theta$$
Band structures map of electronic occupation as a function of binding energy and momentum. They offer direct insight into electronic behavior and offer clues about bosonic coupling to collective modes, which arise from lattice and spin degrees of freedom.

Figure credit: Shen Lab
Time-resolved ARPES uses a UV laser pulse (probe) to map band structure as a function of time delay after an excitation pulse (pump).
Equilibrium ARPES can only capture band structure of occupied states, up to the Fermi level. One of the first applications of time-resolved ARPES was using a pump-probe scheme with near-infrared (NIR) light to pump electrons into unoccupied bands, followed by an ultraviolet (UV) probe pulse to generate photoelectrons. The figure at right includes example cuts of the band structure of Bi2Se3, plotting the electron binding energy as a function of momentum. Here NIR light pumping exposes a topological surface state (the two bands that cross at the center of the cuts), which lies just above the Fermi level.

The time resolution inherent in ultrafast laser sources opens the way to watch light-induced dynamics unfold, including coherent phonon motions and relaxation processes involving electron-phonon and other electron-boson coupling channels. These dynamics reveal electronic interactions that may be crucial to the formation of the equilibrium ground state.