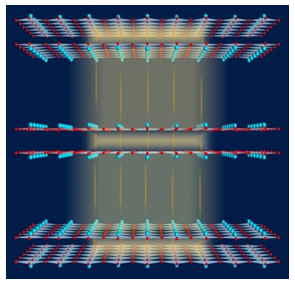 Image credit: Jörg Harms
Josephson tunneling between neighboring CuO2 planes (illustrated in yellow).
By selective phonon excitation, we have shown that it is possible to enhance intrinsic superconducting tunneling in YBa2Cu3Ox (YBCO x). Intrinsic tunneling in cuprates is an equilibrium phenomenon due to the asymmetric nature of superconductivity in these compounds, where Cooper pairs form in the two-dimensional CuO2 planes. Josephson tunneling couples the condensate in neighboring CuO2 planes and produces resonance modes that are related to the relative superconducting amplitude and phase between planes, as well as the geometric spacing of the crystal lattice.

The enhanced coupling could in principle be due to either an increase in the superconducting amplitude (pair density) or a stiffening of the order parameter phase, though the latter appears more likely. Remarkably, we also see evidence of light-induced intrinsic tunneling above Tc, suggesting that incoherent pairing may survive throughout the pseudogap state.

YBCO is a bilayer cuprate, with two CuO2 planes per unit cell, and in the superconducting phase, the Josephson plasma resonance modes produce two edges in the equilibrium c-axis reflectivity which act as optical fingerprints of superconductivity. Below each Josephson resonance frequency, a positive and diverging component of the inductive conductivity serves as a measure of the condensate tunneling along the c-axis. (In-plane, the magnitude of the divergent conductivity, as with a BCS superconductor, scales proportionally to the full condensate density.) 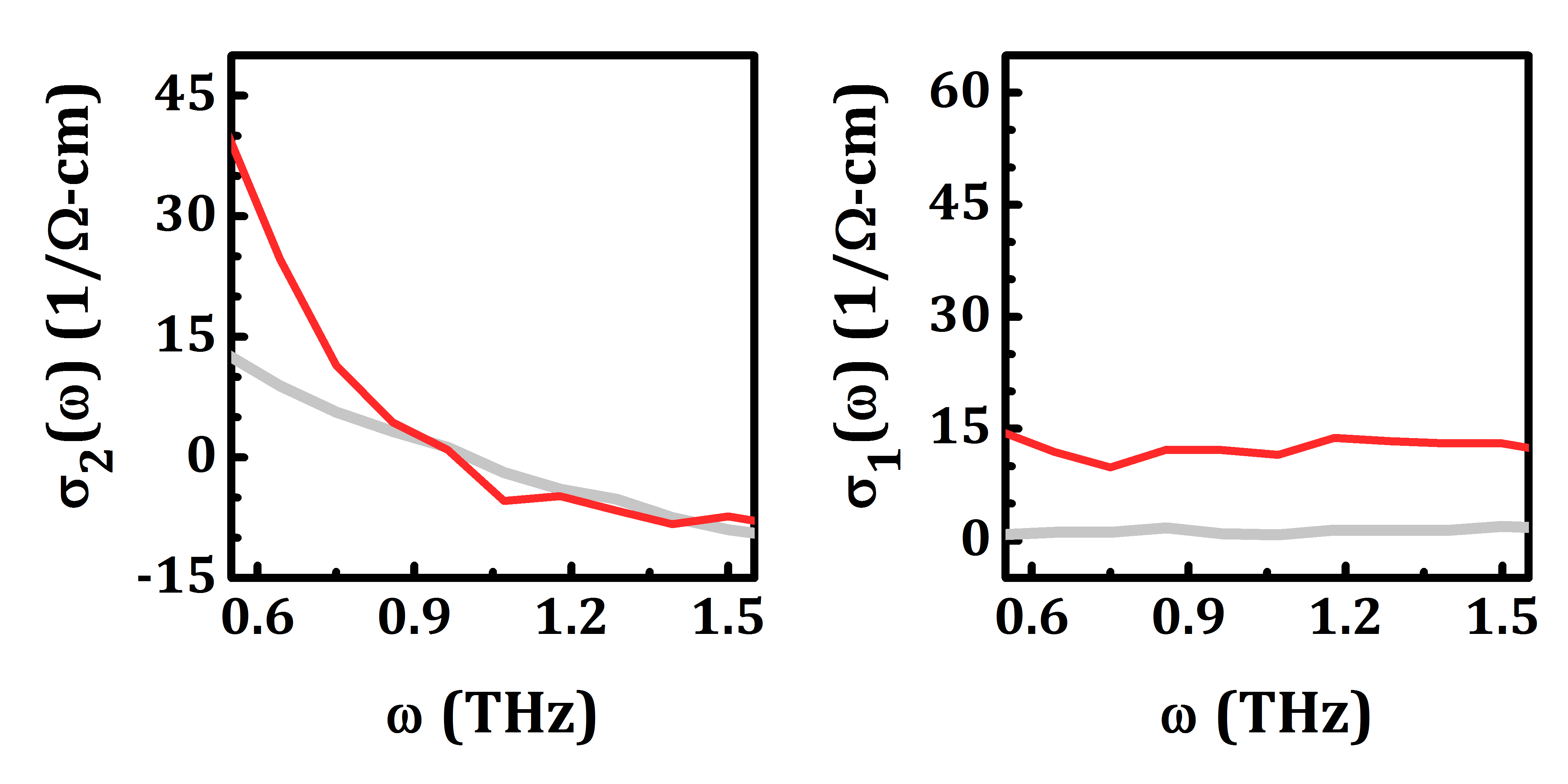 Photo credit: C. R. Hunt
YBCO 6.5, 5 K. In equilibrium (grey), the inductive conductivity σ2(ω) (left) shows a positive, divergent component due to superconductivity. The Ohmic conductivity σ1(ω) (right) is gapped in this frequency regime. After light excitation (red), the inductive response increases and the Ohmic response remains gapped.
Time-domain THz spectroscopy was used to measure the conductivity and determined how light changes the interlayer superconducting coupling as a function of time after excitation.

Within 0.5 ps of excitation, the THz reflectivity shows a blue shift of the Josephson plasmon related to interbilayer tunneling (tunneling between pairs of closely-spaced CuO2 planes). This is accompanied by an increase in the positive and diverging inductive conductivity, evidence of enhanced tunneling (shown at right).

The enhanced intrinsic tunneling can be induced across the underdoped regime. 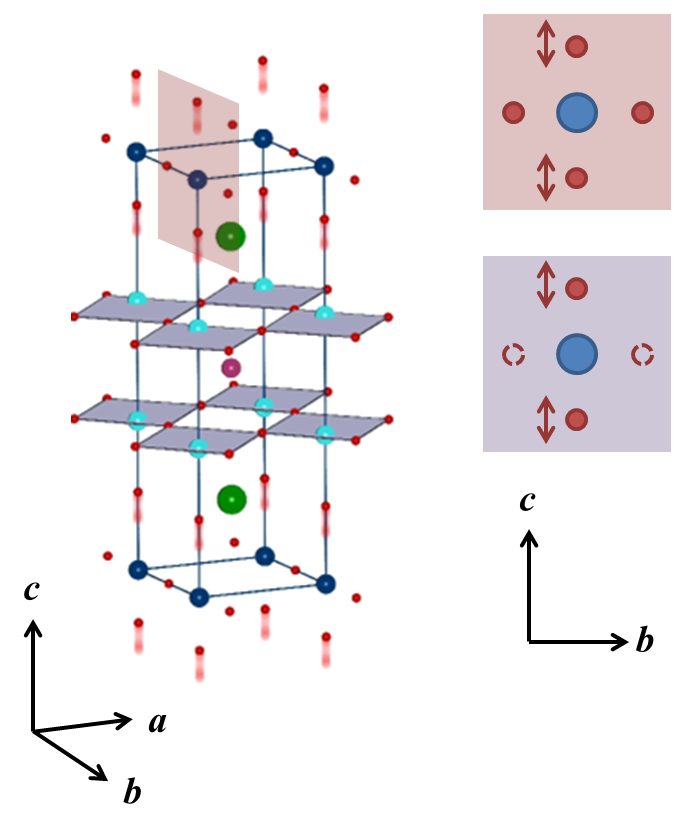 Image credit: Jörg Harms (crystal, left)
In underdoped compounds, there are two B1u apical oxygen modes, associated with the YBCO 6 and YBCO 7 crystal structures. The pump was made resonant with the mode associated with the YBCO 6 lattice, in which oxygen is missing from the Cu-O chains. (Apical oxygen motion is illustrated in the purple square, right.)
The key to this measurement was selective excitation, directing the pump energy to a degree of freedom that could support superconductivity without inducing quasiparticle heating and pair breaking.

We targeted a 15 μm B1u phonon mode of the YBCO 6 lattice, which is related to the c-axis motion of the apical oxygen atoms. These atoms sit above and below the pairs of CuO2 planes. The distance of the apical oxygen atoms is known to be correlated to the superconducting transition temperature Tc in equilibrium, although the precise mechanism behind the relationship is not totally clear.

The enhanced interlayer coupling could only be induced by selective excitation of this mode. The magnitude of the transient coupling decreased as the pump was tuned off-resonance. Excitation at 15 μm with polarization in-plane also produced no enhanced tunneling. In-plane, 15 μm is resonant to another phonon mode, a B3u phonon associated with Cu-O stretching in the CuO2 planes. (Analogous to the mode used to destroy charge stripes and restore superconductivity in La1.8-xEu0.2SrxCuO4.) 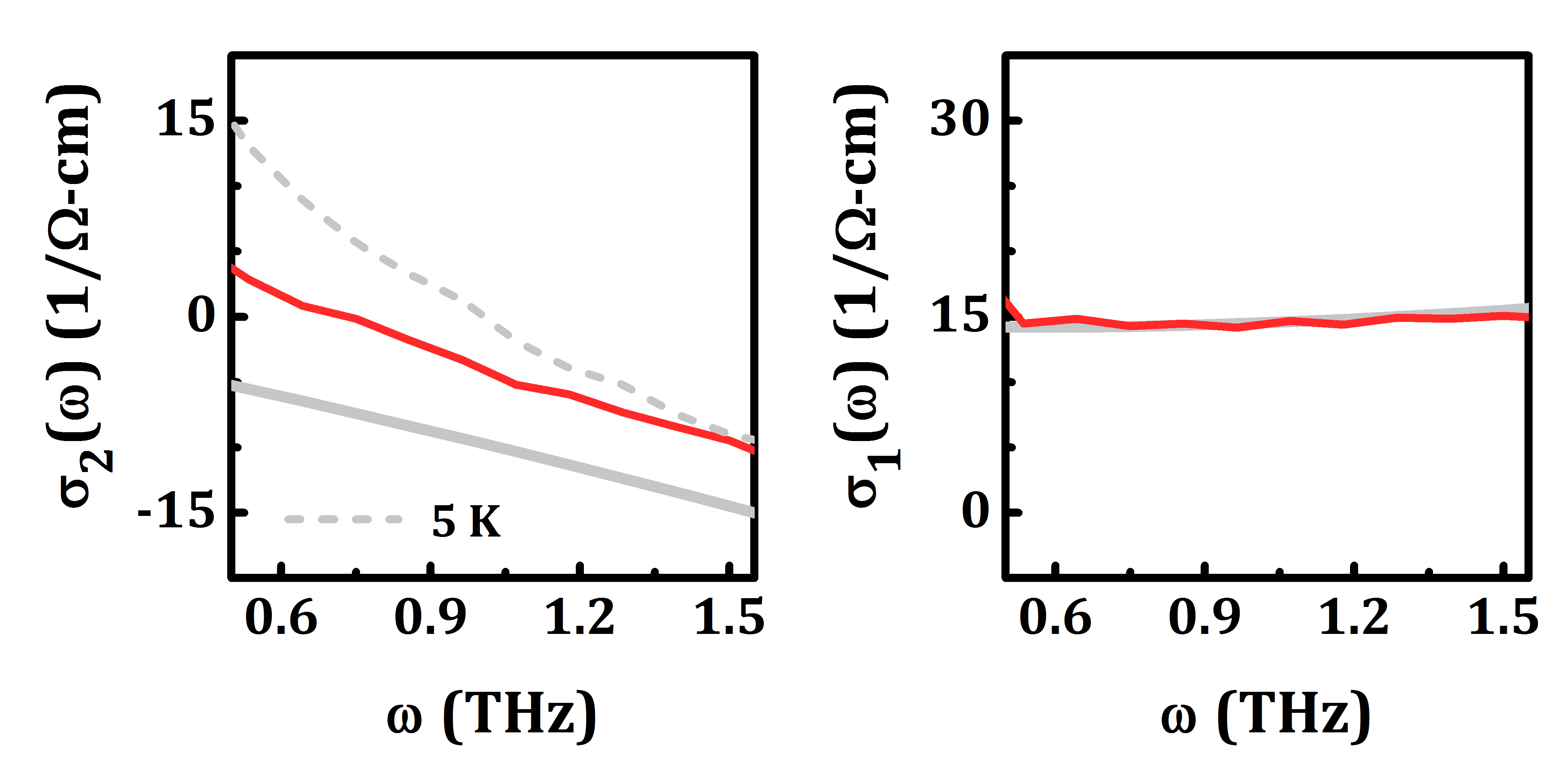 The light-induced reflectivity shows the appearance of a plasma edge near the equilibrium Josephson plasma frequency (at T << Tc), further suggesting that the same density of carriers that give rise to the Josephson mode are responsible for the transient plasma mode above Tc. 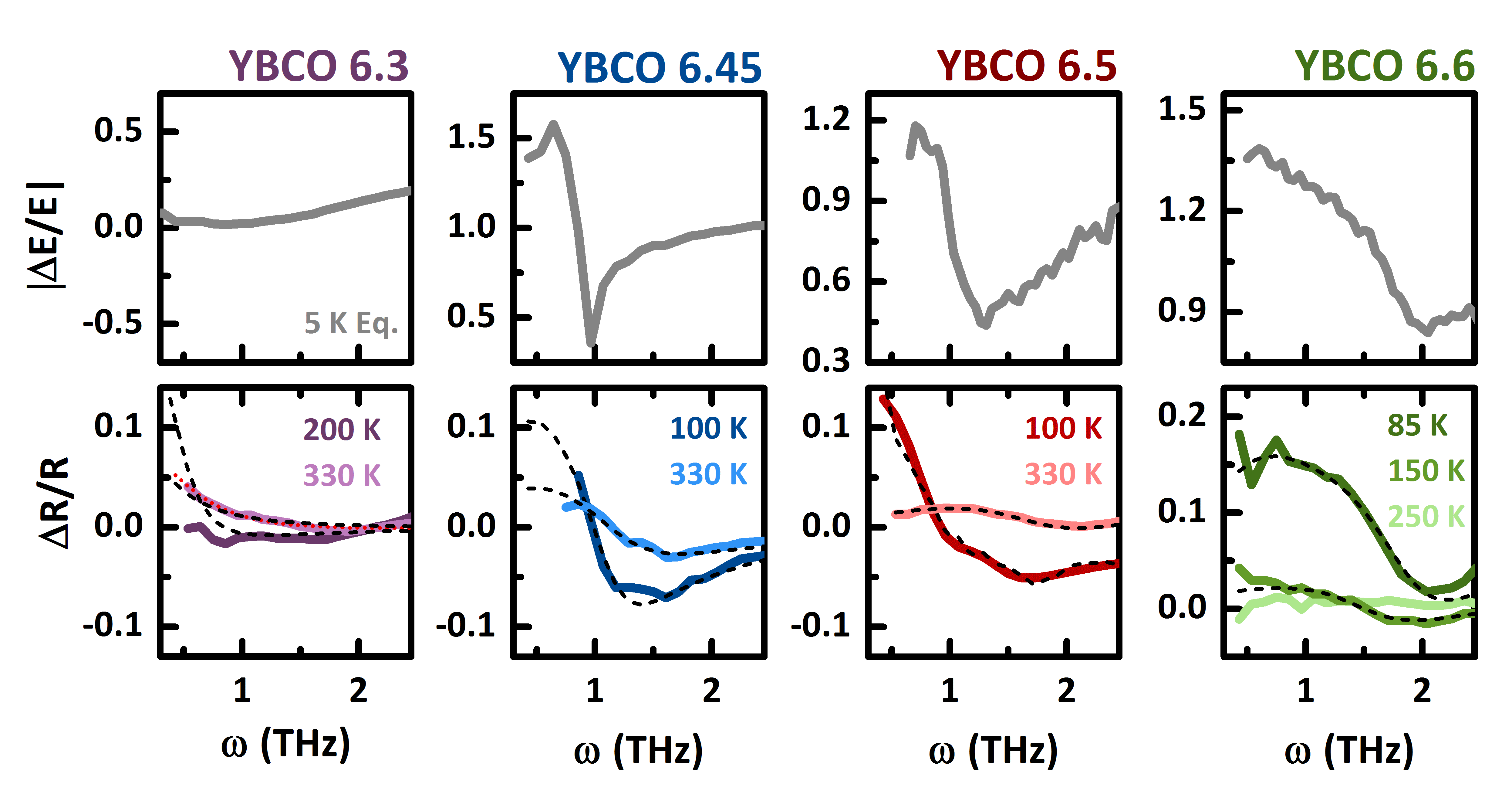 The light induced plasma mode could be generated throughout the pseudogap phase. The onset temperature of the inductive response, T', is shown below on a non-equilibrium phase diagram, indicated with red dots. The light-induced conductivity increases with decreasing temperature, following a mean-field behavior, until a "cusp" temperature, T'', below which it is suppressed. This is suggestive of competition with another order that onsets near T'', perhaps the incommensurate spin fluctuation regime that survives above the spin density wave transition.

Photo credit: C. R. Hunt
Transient c-axis coupling can be induced below a temperature T' (red dots), which appears to track the pseudogap line. At a lower temperature T'' (blue triangles) the condensate decreases with decreasing temperature, suggesting some sort of competition regime.

Several possible mechanisms may be at work causing the enhanced Josephson tunneling. Three of these have been explored experimentally and theoretically: 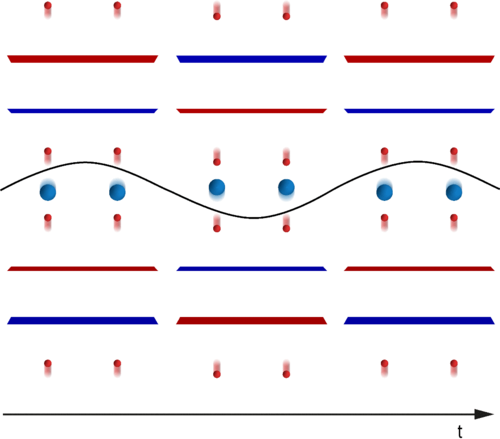 Figure from Ref. [2].
Representation of the YBCO crystal structure, illustrating the Matthey model. The copper oxide layers are shown as red and blue planes, and some of the atoms in the insulating layers are shown. The apical oxygen motion results in an external potential on the CuO2 layers that is periodic in time and staggered along the c-axis, represented by the red and blue coloring.
Modeling a stack of two inequivalent Josephson junctions, the Mathey group found that superconducting phase fluctuations can be suppressed by an external periodic driving potential, mimicking the effect of the apical oxygen excitation. Importantly, the phase fluctuations are reduced for the low-energy (interbilayer) plasmon only, with the effect maximized as the driving frequency approaches that of the high energy (bilayer) plasmon. In this picture, the apical oxygen motion acts as a dynamic driver to suppress fluctuations and would be most effective in a material in which the phonon mode frequency matches the bilayer Josephson plasma frequency.

Our results on the interbilayer plasmon inspired subsequent broadband THz measurements of the high frequency Josephson plasmon (associated with tunneling within the closely-spaced bilayers), which found that indeed the blue shift of the low frequency plasma mode occurs along with a red shift of the high frequency mode, at constant total spectral weight. This observation suggests rather than forming Cooper pairs, the light induces a dynamic redistribution of coupling strengths, supporting the interbilayer plasmon at the expense of intra-bilayer tunneling.

Image credit: Jörg Harms
Above Tc, there is evidence of coherent tunneling between the closely-spaced CuO2 planes in the bilayer (left panel, illustrated in yellow). The light-induced interbilayer tunneling (right panel) may be due to a rearrangement of tunneling strengths.
If such a mechanism is responsible for both the stiffening of the interbilayer Josephson plasma mode below Tc and for producing a plasma mode above Tc, then some localized pairing must survive in the pseudogap. Optical measurements of the equilibrium bilayer Josephson mode do show evidence of coherent tunneling within the YBCO bilayers surviving far above Tc, up to 150 K in YBCO 6.6. Distortion of the YBCO lattice 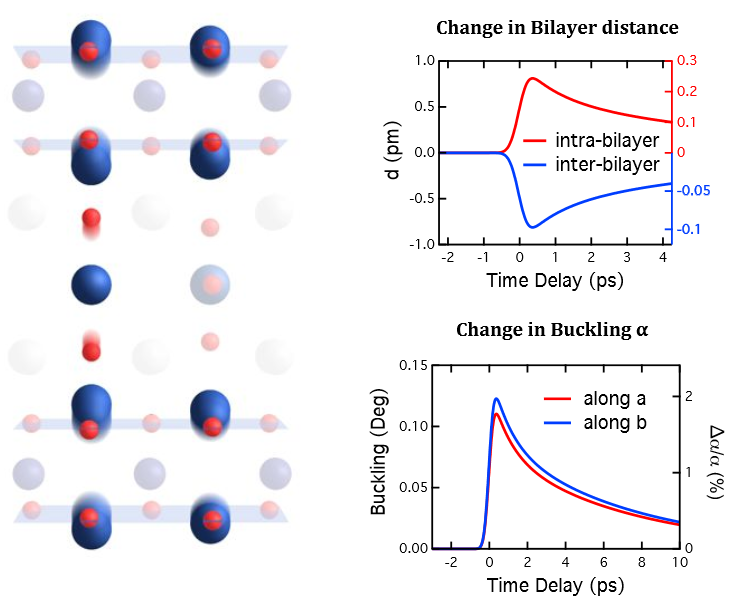 Figure modified from Ref. [4].
The transient lattice structure of YBCO 6.5 is illustrated on the left, with Cu atoms in blue and O in red. The YBCO 6 structure (left column of atoms) shows displacement of the Cu and O atoms while the YBCO 7 structure (right column) remains almost unperturbed. The Cu(2) atoms in the planes are driven such that the interbilayer gap is reduced and the bilayer gap is widened.
Exciting an IR-active phonon mode produces no net distortion of the lattice. However, nonlinear coupling to Raman active modes can (and do!) distort the positions of the atoms, creating a uniquely non-equilibrium lattice structure.

Measurements led by Roman Mankowsky and Alaska Subedi found that the distance between the planar Cu atoms and the apical oxygen decreases after excitation, seemingly in contrast to what one would expect for enhanced superconductivity. However they also find that the buckling of the planar Cu-O bonds increases, with the Cu atoms moving into the interbilayer region. The net effect is a decrease in the interbilayer spacing and a corresponding increase in the intrabilayer spacing. Overall the measured displacements were quite small, on the scale of a pm. However, as the Josephson coupling scales exponentially with the distance between the planes, these shifts may account for the observed increase (decrease) in interbilayer (bilayer) coupling.

Suppression of a competing charge order 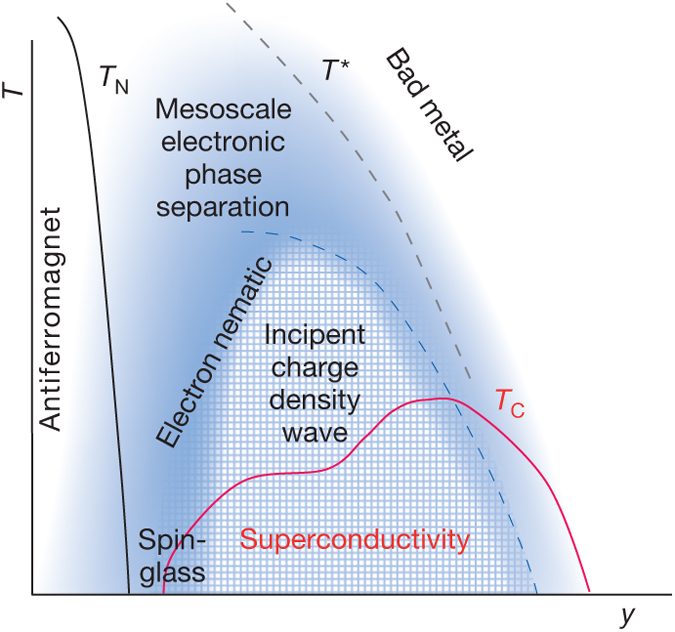 .
Phase diagram of YBa2Cu3Oy with charge density wave (CDW) order centered at p = 1/8 (y = 6.65).
Charge density wave (CDW) order has been a known feature of the lanthanides and Bi-family of cuprates but has only recently begun to be viewed as a universal feature of the cuprate phase diagram after the discovery of charge ordering in YBCO in 2012. In a similar vein as the destruction of charge stripes restoring superconductivity in 1/8th doped La1.8-xEu0.2SrxCuO4, we sought to address whether suppressing the CDW order in YBCO could account for the formation of the transient plasmon in the pseudogap.

A time-resolved resonant soft x-ray diffraction measurement was carried out at the Stanford LCLS x-ray free electron laser. The effect of the 15 μm excitation on the CDW order was measured on YBCO 6.6 just above Tc, where the CDW order is strongest. This doping is near the optimal doping for CDW order, which forms a dome centered around p = 1/8 (x = 6.65).

Indeed, we found that the CDW order is suppressed by about 50%. However the slower onset but the time scale suggests that if the two effects are related, the destruction of charge order is a consequence rather than cause of the transient coupling.

.
Left: RSXD scan of the CDW peak, using π-polarized x-rays at the Cu L3 edge. Plotted along the in-plane component of the diffraction wavevector q|| in the (100) direction. Right: Percentage change in the magnitude of the CDW peak after light excitation.

Publications associated with this research